The only question now is: will they be ranked in either the Sun-Times Top 25 or the Daily Herald Top 20 when the rankings are released on Monday?

After a stellar performance by the Hawks defense en route to a 14-0 road victory against a talented Schaumburg squad Friday night, they better be.

"To be honest, they're the most underrated defense around, I guarantee you that," said Hawks head coach Tim Heyse. "We haven't given up much this year, the defense has been lights out, they fly around and tackle well."

and 3 sacks on the night, 2 of those sacks coming from two-way starter, Femi Oginni.

"Femi is starting to get conditioned," said Heyse. "Early on, when it was hot out, he'd be gassed…but he's coming around and he is a great player."

The Hawks engineered an 80-yard, 8-and-a-half minute drive to start the game and got on the board when Max Lock's 15-yard TD jaunt gave the visitors a 6-0 lead with 3:33 remaining in the first quarter.

That drive was highlighted by Hoffman senior quarterback Kyle Krogstad's 15-yard completion to Jordan Lane on 4th-and-10 at the Saxons' 34-yard line.

After that score, both defenses took center stage and denied each other from finding the end zone for the rest of the half.

"Outside of that first drive, I thought our defense was absolutely tremendous tonight," said Saxons head coach Mark Stilling.

Boasting the MSL West's best defense coming into the game in which Schaumburg had allowed just 36 points to opponents all year, the Saxons' defense continued to make plays in the second half that kept Schaumburg within striking distance.

Most notably, was the Saxons' stand with under a minute left in the third quarter.

After the team received a late hit penalty that put the Hawks on the Saxons 9-yard line, Schaumburg's defense turned away Hoffman's prolific offense to keep the game at 6-0 headed into the final quarter.

Trying to parlay the momentum of that defensive effort to end the third, Schaumburg mounted a drive that reached its own 40 before an errant pass deflected off a Saxon receiver into the waiting arms of defensive back Marcellous Chew to end the drive.

Following the play, Schaumburg was hit with an unsportsmanlike conduct penalty that gave the Hawks the ball at the Saxons 32. Penalties were Schaumburg's achilles heel all evening long.

"I'm extremely disappointed in terms of discipline," said Stilling. "Hat's off to Hoffman, they played well, but our most concerning factor was our lack of disciple tonight."

After the penalty, Hoffman put the nail in the coffin just a few plays later when Krogstad found Malik Whitehead from 9 yards out to give the Hawks a 12-0 lead with 7:39 to go in the game. Jordan Lane added the 2-point conversion on a nifty reverse to make it 14-0.

Schaumburg mounted one final drive in the waning moments, getting to the Hawks 17, but then Jaydon Dennis' sack, followed by Cameron Kindred's magnificent one-handed interception, ended any threat as Hoffman prevailed in a tough contest, 14-0.

"Every conference game is going to be like this," said Heyse. "You've got to grind these games out, there's no slouch in this conference."

O'Shea's Big Day Not Enough To Save Palatine

Broncos Breeze By Hawks After Big First Half

Fremd Rolls On To Round 2

Ayala Comes Up Aces Against Hawks

Fremd Rolls On The Road 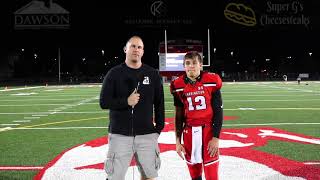